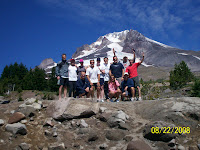 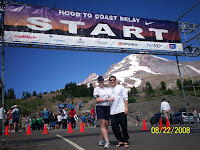 I am still having trouble walking my legs are so sore from running my first Hood to Coast relay this past weekend. Seriously, I look like I'm about 90 when I walk. Going up stairs is OK but down? Ouch.

For those unfamiliar with the Hood to Coast, it's a 197-mile relay race. Yes, 197 miles. Teams of 12 people run from Mt. Hood to Seaside, Oregon. Each person on the team runs 3 times, averaging 4-5 miles per leg. This was the 27th year of Hood to Coast and teams come from all over the world to run it. There is a Portland to Coast walking version, which is 127 miles. Our team is unique in that we have 2 teams who run together. So 24 people in total. That way you run with a partner, which makes it more fun and safer for everyone. I was assigned the first leg. I ran Leg 1, Leg 13, and Leg 25 and had the shortest overall distance of just under 14 miles all together. 14 miles isn't all that many, but when it's broken up into 3 legs and you run every 9-10 hours, it's much harder. You don't get much time to recover between runs, nor do you get much sleep. It took our team about 27 hours to run the race, and during that time you are either running or in a van with 5 or 6 other sweaty people while someone else is running. I think I got about 2 - 2.5 hrs of sleep during the race, and that was in an open field in a sleeping bag next to the van with several hundred other people. Not exactly quality sleep.... And yet, despite that, I'd do it again!

My first leg was rated "very hard" because of the elevation change. I literally ran down the mountain. It was 5.6 miles with a 2000 foot elevation change. It can be very hard on a persons knees. Thankfully, I can do downhill. Uphill? Not so much. But downhill is good for me. I had been cautioned by many people to take it easy 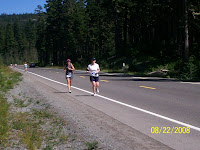 and not jam down the hill because I'd be paying for it on my next two runs. So I held back a bit. I felt I could have gone faster, but didn't. I did my best to stay with my partner, but she simply ran slower than me. At about halfway we had to move to a single file line and I just sort of naturally moved ahead of her and started running a bit faster. It worked out because she ended up needing to pee anyway. I averaged 7:50 miles on that leg. Pretty good for me, especially considering I could have gone faster. I felt good after the leg and enjoyed cheering the rest of the team on during their legs. After our van finished we had several hours to kill while Van 2 took over. We went to a teammates house for showers, a late spaghetti dinner and to watch some Olympics. A few people tried to sleep, but I don't think anyone really did. At 10:15pm or so it was time to load back up and head into downtown Portland for the next exchange. I took over at about 11:15pm and got to run along the river in downtown Portland. It was so pretty! Then we crossed a bridge from the eastside to the westside and kept on running into an industrial section of town. My partner was struggling with some asthma so after about 2 miles of slower paced running we had to walk a bit so she could try to catch her breath. It was really hard for her. I was not about to run ahead and leave her by herself at night in the city. That's the whole point of running in pairs: safety on the course. So I walked with her, ran when she felt up to it, and just chatted. Our time for that leg wasn't very good, but it didn't matter - we're not a competitive team, and it was really pleasant to be running/walking in the city. We handed off to the next runners and the time in the van began again, cheering our runners and offering support along the way - water, gatorade, etc. It was during these middle legs that we came upon a terrible accident scene. Earlier a 18 yr old girl running on the road (with the required reflective vest and carrying a light) was hit by a car and seriously injured. The car veered into her and continued on down a pretty long embankment. We haven't heard yet what exactly happened - it wasn't like the driver was trying to turn into a driveway or street and just didn't see the runner. There was no turn to be made there - the car just struck her, tossing her up on the windshield and breaking quite a few bones in the process. Poor girl! I guess this is the first time something like that has happened in Hood to Coast history.

After everyone finished their 2nd legs we drove ahead to the next exchange point, which was a random farm in the middle of nowhere. We pulled in about 4:30am and parked among a couple of hundred other vans. We spread out a tarp next to the v 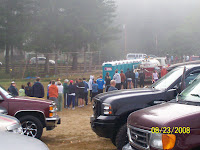 an, rolled out our sleeping bags, and tried to get some sleep. I got up at about 6:30am, as it turned out. I needed to pee, just like everyone else, it seemed. Long Honey Bucket lines at this place - ug! 20-30 minutes later I felt better. I ate a banana and a Cliff Bar for breakfast and got ready for my final leg. We had no cell reception in this field so we weren't quite sure if Van 2 was on schedule or not. It was estimated I'd take over at about 8:15am. I think it ended up being closer to 8:30 or 8:40 when I started my last leg. This leg was my shortest - just 3.75 miles. It had a very gradual uphill, but it was morning and the weather was cool and misty so it was easier for me to tackle the incline. I didn't feel too bad running ahead of my partner because it was daylight, and that's what happened. I was able to pass 6 or 7 people and felt pretty good once I got the lead out of my legs. They felt like bricks when I first started! I finished strong and ran 8.5 min miles, which is good for me, and really good for my last leg! I was proud of my time.

Mr. Chick's last leg was a killer. It's nicknamed Mt. Fuji because of the elevation shape of the leg when plotted on paper. It's 3 miles uphill at a pretty decent incline (by now we were running in the Coast Range), and then 2.55 miles down. It had gotten pretty hot and sunny by then and the leg has a lot of switchbacks and turns as you run up the hill. It's brutal. This leg is what makes Leg 5 one of the toughest of all the legs. You put your best runners on this one. And that was Mr. Chick. He did great! He ran up that hill and made it his bitch. He did it in under 8 min miles and with painful stomach cramps. He's a rockstar!

After everyone in our van had run their final legs it was time to head to the beach. We had rented a place for the night and we all hit the showers. After cleaning up a bit we went to find some food of substance (pizza) and then hit the beach to wait for the rest of our team to get there so we 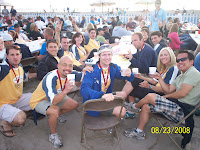 could all cross the finish line together. It's quite a party at the beach during Hood to Coast! Lots of tents, a big beer garden, a stage with live music, etc. It was a gloriously beautiful day, too. After we crossed the finish line we hit the beer garden and relaxed. Everyone was starting to get sore and many of us were tired, but it was good fun. We ran into other people we know who'd run the race, too, so that was fun to see them. Around 9pm Mr. Chick and I headed back to the beach house and I took a bath to soak my legs as they were hurting like motherf*ckers by then and walking was tricky. Mr. Chick went to the back duplex to join the rest of the team who 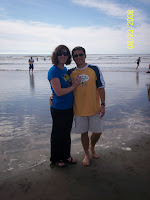 was there enjoying a keg. I ended up feeling so tired in the bath that I just went to bed. I called it quits early, but I was not the first! Let it be known that a couple of other people had crashed out before me! I slept great but when I woke up I almost couldn't walk my legs were so sore! Other people were walking funny, too. Going down stairs is a slow, painful process. We all went to brunch and then packed up to head back home. I'm still sore today but it's getting better. I had a lot of fun doing Hood to Coast. I enjoyed the camraderie - both in the van and on the course. It feels like an accomplishment.

If you ever get a chance to join a HTC team and run the race, do it! You see the beautiful Mt. Hood, pretty Portland, and the gorgeous Oregon coast. You see some crazy characters, like the guy almost 7 feet tall who ran in nothing but a wacky wig and pink speedo. You see some inspirational people, like the team of blind runners. Or the walking team of senior citizen ladies, the oldest of whom is 91 and walked 60 miles. You meet new people - like the young (American) lady in our van who grew up in Singapore, is currently in college in Seattle, and speaks 3 languages. She ended up meeting a guy from France at one of the exchange points and was speaking with him in French. Sure, you're sore afterwards, but it's a good kind of soreness. The kind that speaks to challenge and effort and triumph. Hood to Coast is an experience I'm happy to have had.